On Sunday China’s Legislature helped women by banning sexual harassment of women and empowers women to “lodge complaints” to relevant organizations. Sexual harassment has traditionally been viewed as a moral issue and not a legal one in China, which means that this is also a huge symbolic step.

This may seem like something that should’ve happened a long time ago, but better late than never. This legislation will improve the lives of all peoples and make the state the more democratic. 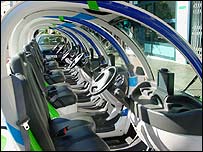 You may see something odd crawling around the twisting, narrow streets of Cordoba, Spain. The GEM car, a small electric vehicle with a top speed of about 32kp/h, has found a useful home. Referred to as “blobjects,” the cars have the look of something out of mid-seventies sci-fi. Which is meant as a compliment.

The local Cordoba government has chipped in funding for tour operators to rent out GEM cars to tourists, much to the chagrin of local taxi drivers. The cars are fitted with GPS systems and computers that allow them to give guided tours of the city. However, there’s something that makes these cute little alternative vehicles even better: they’re powered entirely by open-source software. (It’s even made by Daimler-Chrysler, of all people!) Thank you to the BBC for the photo.

Do you like ThingsAreGood.com?
Think it can look better?

Because we do. And we would LOVE for you to send us your ideas on what a logo and/or banner should look like for this site. The “look and feel” of the site’s current appearance is not an issue. Let your imaginations go wild!

Email submissions to adam {at} thingsaregood.com

The Canadian Broadcasting Corporation has locked-out their workers over a contract dispute. As a result of being out of work since the 15th many have had to look elsewhere for money. Some are doing freelance work.

In a very creative way to support each other and get public support some locked out workers have made a website. It has podcasts from CBC workers and job info for those that need to find some quick cash.

If these workers are creative enough to do this (and it is getting a fair bit of coverage), why would CBC management lock them out? Does the future of labour disputes exist online.

A little mystery is sometimes a good thing, and nothing seems to bring out a feeling of child-like curiosity like a cosmic mystery. The Cassini-Huygens probe to Saturn has uncovered just such a mysterious gem. ESA, and NASA scientists have confirmed that the moon Enceladus has an atmosphere. As well, it’s Southern polar region seems to be a “hot-spot,” riddled with “tiger stripes.”

Human ingenuity, curiosity and exploration put to good use! And, with gorgeous photos.