Iran has something that is unique for the Middle East: the only all-female firefighter squad.

From The Christian Science Monitor:

“Not every rescue requires a feminine touch. But in the Islamic Republic, which tolerates little public mixing of the genders, the 11 women here are breaking new ground and creating a model for cities across the country. They also represent a strain of pragmatic progressivism in Iran that is rarely matched elsewhere in the region.”

The CBC is reporting that some Palestinian militant groups have agreed to stop launching rockets.

Recently there has been an increase in violence in Israel and this recent peace agreement brokered by Egypt should curb some violence.

The planet Mars made it’s closest pass by Earth in 60,000 years in late August this year. The red planet will be taking another close swing by Earth this week-end so those with telescopes might want to take a look. This week-end Mars will be closer to Earth by about 3 times it’s average distance to us.

Mars is the planet in the sky that is most similar to Earth and many scientists believe it is possible that life once flourished there. Many astrologists believe that Mars’ force encourages fierce compassion, aggression, heat, feistiness, courage, and passion, which happen to be some pretty interesting characteristics for days that fall on this years Halloween week-end.

So if you get the chance this week-end maybe you could look up! And fantasize about martians. Who knows. One may even come to your door. 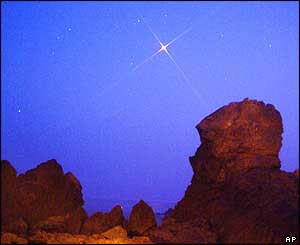 To see more pix of the planet you can go HERE.

A Canadian engineer has proposed to use tornadoes to power wind turbines that in turn will create electricity. The concept is similar to a solar tower, which uses solar heat to produce wind power. Efficiency of a solar tower relies on how big it is, the bigger the better. The tornado-based power plant does not need to be extremely tall, thus saving costs.

The tornado itself is self-sustaining once it is put into motion since it relies on heat transfer. Located at the bottom of the tornado generator turbines would be located to harness the power of nature. So far a mockup has been made, but a full scale test has yet to happen.