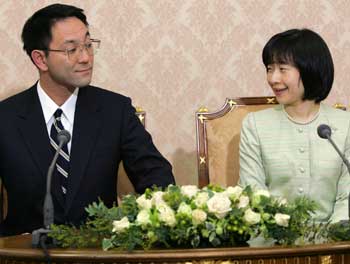 Japan’s Princess Sayako has recently chosen to wed a non royal ‘commoner’ and has agreed to renounce her title to do it. After saying her farewells to the imperial family, the only daughter of Emperor Akihito abandoned her title as Princess. She is the first to do so in 45 years since her aunt married a non royal in 1960.

In this day and age many formal hiarchies aren’t holding as much power as they used to. For a woman to make a choice to lose her royal status (and royal allowance) for love is not only a very beautiful thing, but a step for woman everywhere who have their fate chosen for them.

The Japanese royal household currently faces a succession crisis, with no male heir produced for 40 years. As a result moves are under way to change the law to let women ascend the throne.
Yay woman power!!!