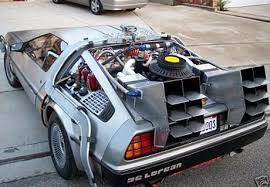 It seems like that neat engine, which is powered by trash, in that car from Back to the Future is almost real! Researchers at UC Davis have found a way to turn leftovers from meals into biogas that can be used to generate electricity or make fuel. That in itself is not revolutionary, what is though, is that they found an effective (cheap) way to do this on a large scale.

The machine will use leftovers from restaurants to make energy, thus making it also a waster-diversion program to boot.

“The Biogas Energy Project is the first large-scale demonstration in the United States of a new technology developed in the past eight years by Ruihong Zhang, a UC Davis professor of biological and agricultural engineering. The technology, called an “anaerobic phased solids digester,” has been licensed from the university and adapted for commercial use by Onsite Power Systems Inc.”