Actress Angelina Jolie has recently been presented with the Global Humanitarian Award from The United Nations Association of the U.S.A. for her work in aiding refugees all over the Globe.

She first became involved with the UNHCR (United Nations High Commissioner for Refugees) after travelling to the small African country of Sierra Leone, which has been devastated by years of civil war. After witnessing the suffering and challenges that refugees face she chose to use her noteriety as a highly popular actress to aid in their cause.

Angelina has visited more than 20 countries to talk personally to refugees and has also become highly regarded for her activism before senior political and economic leaders in arguing the protection of refugees. She has served as a voice for millions of displaced people all over the Globe. 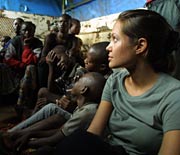 UN High Commisioner for refugees AntÃ³nio Guterres said in his congratulatory message “The depth of your dedication and commitment inspires many others, especially the legions of young people who admire you, to think about how they too can help to make the world a better place.”