A Pentagon General told BBC â€œIf we lose America, we lose the war, â€ and this seems to be happening already. 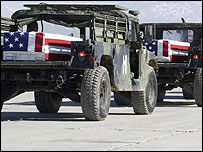 Ralph Begleiter is a professor at the University of Delaware. Some time this year he brought the US Defence Department to court in order to force it to publish pictures of coffins coming home from Iraq.
The Pentagon then published 700 pictures, and this – together with the increasing number of deaths and a lot of resistance from victimsâ€™ families – had a big impact in American public opinion about the Iraq war. As American soldiersâ€™ casualties have reached 1850, American public support for the war has dropped to about 40%.

Thanks again to BBC news for the information and picture.

Fernando lived in Argentina for almost 30 years, studying biology and working as little as possible, when he decided to use money he got from a bad bad corporation that laid him off to go for a year-long trip around the world. The end of the trip found him ready to get married to a Canadian, balder, and less interested in biology. Now he lives in Toronto. He is now a father, which will do for a happy biography ending.

View all posts by Fernando →